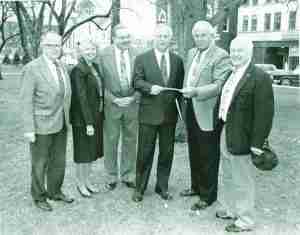 The Elyria Apple Festival began in 1980, with a pumpkin of an idea.

The idea for the festival began in the spring of 1980 at an Ohio Banks Association meeting in Columbus, Ohio. Attending from Elyria were Bill Fitch and Al Murphy of Elyria Savings and Trust (now Huntington Bank) and John Bates, manager of the Elyria Chamber of Commerce. The program at the meeting was presented and intermingled with The Pumpkin Festival in Circleville, Ohio. The group from Elyria was so enthused they decided to hold a festival in Elyria.

The founders then made two crucial choices: the name and the President. For President, the founders selected Lyle Crosby. Crosby had been a sales representative for the Elyria Chronicle Telegram newspaper and founder of Sibley, Inc. Crosby was well known in Elyria as a community activist, Rotarian, and most importantly a leader. 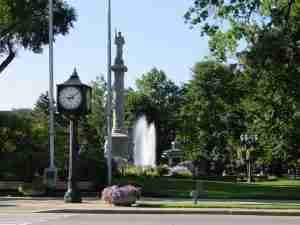 The founders wanted a name that represented a theme the community could enthusiastically support. With the numerous apple growers in the area, fall suddenly approaching, and apple pie being an All-American favorite, the apple was selected.

The apple growers readily complied, making cider and donating apples when possible. Held annually during the third week in September, the festival’s maiden run was a near-washout. It snowed the night before and some vendors left. The festival lost money.

Crosby did not give in to an unsuccessful launch. He quickly recruited city leaders Linda Brown, Al Gelman, and John Blevins, and together with hundreds of volunteers, the Elyria Apple Festival now draws over 100,000 people to the 100-booth festival. Financial assistance from the Century Club gave the festival the funds it needed to be a festival the city could be proud of and one people would come back to year, after year.

The purpose of the Apple Festival remains as in the beginning – to promote Elyria with celebration. The dollars acquired are saved for future years’ programs and invested to improve the downtown square at Ely Park. Some of the improvements due to Apple Festival dollars are the lighting at Christmas, the fountain, gazebo, and clock.